Vision Heirs was started by Pete Olson and his family to provide people with a Biblical perspective of history. It was started with a desire that people not only learn the facts of history but also the life application for today. Past events have led up to our present time, and it is vital that we learn from them and in turn make a difference for the future. 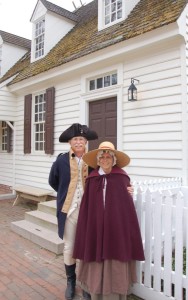 Born in California in 1949 and subsequently moving to the Washington, D.C., area, Pete Olson developed a love for American history at an early age. Spending much of his childhood with his grandfather Fay C. Brown, a noted scientist in the 1920s and 1930s, also instilled in him the joy of learning. This love for history and joy in learning was further strengthened when his parents purchased a farm in the beautiful rolling hills of Northern Virginia. One of his favorite pastimes on weekends spent there was collecting Civil War buckles, bullets, and other paraphernalia.

As he grew older, he had the opportunity of traveling and working with his mother, a geologist with the U.S. Department of the Interior, in many sectors of the West, opening his paths of learning to the colorful history in that region. After graduating from Bethesda Chevy Chase High School in Bethesda, Maryland, in 1967, he decided to further his studies at Colorado State University, with a major in history.
Graduating from there in 1973, he felt the call to ministry and served as a counselor to high school students. After completing his Masters of Divinity with Denver Seminary in 1982, he spent a combined twenty-six years as a pastor and as a primary and secondary teacher in two Christian day schools. Pete and his wife Roxanne have four grown children and were early pioneers of the home school movement in Colorado in the 1980s.

Now residing in Colorado, Pete enjoys sharing his wealth of knowledge by teaching U.S. History, Government, Economics, and World History to home school students in Colorado, as well as speaking across the country. He is also presently the pastor of Good Shepherd Bible Church, located in Arvada, Colorado.

Most people think of an inheritance in terms of homes or property or stocks or various possessions, but the most important legacy is that which is handed down from generation to generation in the form of character, values, and faith. We in America have a rich Christian inheritance from our Founding Fathers. As an inheritance can be lost, this truth has been kept from our recent generations. Pete Olson and his family are dedicated to sharing the Christian faith and the stories of our rich Christian heritage with today’s Americans.

We believe in the One True God, existing eternally in three Persons: Father, Son, and Holy Spirit. These three are coequal from all eternity, each with distinct personalities but of one nature and character.
We believe the Bible is the verbally inspired Word of God and is the only infallible rule of faith and practice for the believer.
We believe Jesus Christ is the eternal Only Begotten Son of God, that He entered into the world through the virgin birth, and lived among us without sin as perfect Man and perfect God.
We believe Adam was directly created in innocence and in the image of God and did not evolve from preexisting forms of life. By voluntary transgression, he fell, and thus the whole human race is now totally sinful by nature and, therefore, under just condemnation to hell, which is eternal separation from God.
We believe Jesus Christ shed His blood on Calvary as a substitute for all sinners, was buried and rose again bodily, and ascended to the right hand of the Father as our Mediator and will personally return.
We believe people are justified by grace alone through faith in the shed blood of the Lord Jesus Christ.
We believe the Holy Spirit convicts the sinner of sin and regenerates, sanctifies, and indwells the believer.
We believe in the resurrection of both the saved and the lost-the just unto the resurrection of eternal life with Christ in Heaven and the lost unto the resurrection of eternal damnation in Hell.
We believe Satan is a fallen angelic being, the great deceiver of the world, and that hell is a place of eternal punishment for him, his hosts, and all unbelievers.
We believe Scripture commands Christians to abstain from all forms of compromise of unbelief and worldliness.